The following options are available for those of you who have tickets to this concert:

Please email us with a request for a refund or exchange.


On behalf of the Board of Directors, the musicians and volunteers of the Orchestra, I would like to extend my sincerest thanks for your support during this difficult and challenging time. As many of you are aware, the City of Toronto has taken unprecedented measures to keep people safe and to lower the rate of infection of the COVID-19 virus in our community. These measures include the closure of municipal facilities, community spaces, recreation programs, and the like, through June 30, 2020. This means that we will be unable to perform our May 2 Concert, "Romantica".

Thank you for your understanding and support. We look forward to seeing you in person on the other side of this pandemic crisis. Until then, stay safe and healthy.

Our spring concert will feature a selection of popular romantic works under the baton of guest conductor Oliver Balaburski. The program will include Stravinsky's Suite for Small Orchestra and Schumann's Symphony # 3 "Rhenish". Beethoven's popular Concerto No. 5 "Emperor" with young pianist Charissa Vandikas as soloist will close the program, celebrating the 250th anniversary of this iconic composer and the legacy of his indelible cultural influence. 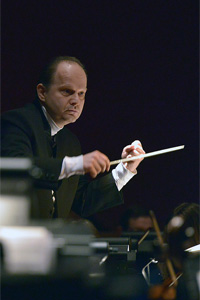 In his conducting career, Oliver Balaburski had an opportunities to become involved in music making in different genres equally, opera, symphonic, chamber and even in the characteristic Silent Movie performances. His broad interest, embracing the challenges and performing with the full artistic capacity of the ensembles. In the past few years he emerge himself in the field of composing and as result he will have a World Premiere of his first major piece, a Musical Narration in 5 parts " Sadie's Door" with the story written by Edward Moll.

In 2006, seeing the opportunity to go deeper into the secrets of the broader symphonic repertoire, he started his Masters studies in Performance at the University of Toronto, with his mentor and teacher, the eminent conductor, Prof. Raffi Armenian. He also studied with Prof. Dr. Doreen Rao at the University of Toronto, fulfilling the necessity for the philosophical and practical approach to the extensive vocal- instrumental music.

In 2008 Oliver received a degree in Master of Music, Masters in Performance (conducting).

His conducting career started with his first engagement at the Macedonian Opera and Ballet mentored by the distinguish conductor Vancho Chavdarski. In 1999 he was awarded with the Norman Del Mar Junior Fellowship in Conducting at the Royal College of Music in London, UK, specializing in symphonic repertoire and studying with the distinguished conductor and Professor John Carewe. He has had the honour to actively participate in Master Classes with Sir Roger Norrington and Michael Tilson Thomas and with one of the greatest Bach authorities, Helmuth Rilling.

1995 Oliver graduated conducting at the University of "Sts Cyril and Methodius" in the class of Fimcho Muratovski and supported and mentored by maestro Vanco Cavdarski he began his successful conducting career.

After Oliver's return from UK, he was appointed as Artistic Director and Conductor of the Opera of the Macedonian National Theater, where he managed to significantly increase the budget, enlarge the repertoire and promote the Macedonian Opera House. Until 2004 he was the Principal Conductor at the same Opera Company.

He is the recipient of many awards and recognitions such as: 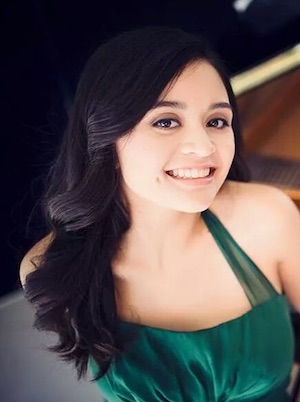 Praised for her “fabulous sense of style and musical expression well beyond her years”, Charissa Vandikas has been featured in CBC’s prestigious list, “30 hot Canadian classical musicians under 30”, and was recently honoured to receive the 2018 Developing Artist Grant for Classical Piano from the Hnatyshyn Foundation. She has won top prizes in various competitions, including the Canadian Music Competition, the CFMTA National Competition, and the Glenn Gould School Chamber Competition. Winning the Glenn Gould School's Concerto Competition two years in a row, she performed with orchestra in Koerner Hall alongside conductors Johannes Debuss and Tito Muñoz.

Charissa has appeared as a soloist in the Kitchener Waterloo Chamber Music Society, the Arts and Letters Club Toronto, and in the Canadian Opera Company’s lunchtime concert series. In 2016, she was named a Stockey Young Artist of the Festival of the Sound and toured Ontario the previous year as an ORMTA Young Artist. Charissa made her orchestral debut with the Greater Toronto Philharmonic Orchestra under the baton of David Fallis in 2013, and is thrilled to be returning in 2020. She has performed with the Haydn Jeugd Strijkorkest in the Netherlands, the Toronto Sinfonietta, Cathedral Bluffs Symphony, the York Chamber Ensemble, and the Royal Conservatory Orchestra. Charissa is active as a chamber musician, notably in her piano duo, La Fiammata, who were the 2017 Grand Prix Winners of the Canadian Music Competition, and later youth ambassadors for CMC's 60th anniversary. In November of last year, they took home first prize in the North West International Piano Ensemble Competition. They have performed with the Royal Conservatory Orchestra, and their recording of Poulenc's Double Piano Concerto in Koerner Hall was featured on CBC Radio's program, In Concert.

A native of Newmarket, Ontario, Charissa received her ARCT Diploma from the Royal Conservatory of Music at the age of 13, and completed her Licentiate Diploma in 2015. Her former teachers include Michael Esch and Janice Lin. Studying with John O'Conor, she completed her Bachelor's of Music in 2019 at the Glenn Gould School. She is excited to pursue graduate studies at the Université de Montréal with Jean Saulnier.