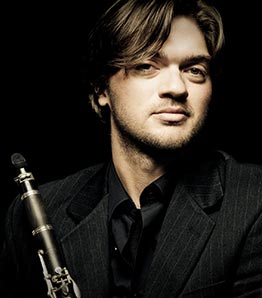 Highly praised on two continents for his glorious tone, precise technical control and musical imagination, Kornel Wolak is well on his way to a major career as a soloist and chamber musician in both classical and cross-over repertoire.  Critics have hailed him for his playing that showed "admirable calm and patience in shaping beautiful sonorities…full of energy," (Andrzej Chylewski, Glos Wielkopolski); "beautiful [playing] in the lyric selections…a lot of imaginative colors, dynamics, and rubato," (Jolanta Brozda, Gazeta Wyborcza), and "control and a smooth, elegant expressivity are what make Wolak shine," (John Terauds, Toronto Star).

As a member of the renowned Quartetto Gelato from 2007 to 2009, Wolak performed on its 2009 recording, Musica Latina. He also appears as soloist on a 2007 CD of Karol Kurpinski's Clarinet Concerto, released by Channel II of Polish Radio – a CD that was nominated for Poland's highest recording award, the "Fryderyk".  Wolak is a regular fixture on the airwaves, including CBC Radio 2, Classical 96.3 FM, Public Radio International, and in the US, on National Public Radio.

Kornel Wolak's artistry has been admired by audiences at over 90 concerts in North America alone.  As a soloist, he has performed with the Quebec Symphony Orchestra, Toronto Sinfonietta, Poland's Poznan Philharmonic Orchestra's opening 60th season gala concert, the Polish Radio Chamber Orchestra, and Charleston (North Carolina) Symphony Orchestra, amongst others.  He has a return engagement with the Poznan Philharmonic later in 2010.  As a chamber musician, he has appeared with the Wieniawski String Quartet, the Glenn Gould String Quartet, and the Lodos Wind Quintet.  His orchestral experience includes regular freelancing with the Toronto Symphony Orchestra, as well as other Ontario orchestras.

Also devoted to music education, Wolak established Music Mind Canada (MMC), an initiative that designs, promotes, and produces educational programs for schools, local communities, and other groups interested in learning about music.  Well-structured "theme recitals" are one of many ways that he introduces music to wide audiences.  The W?oc?awek Tribute noted that "Mr. Wolak's natural way of connecting with the audience made his educational series of recitals entitled From B(ach) to Z(emlinsky) an unexpected learning through the art experience for everyone….with his excellent balance of playing, lecturing, and demonstrating made the music accessible…. The audience was moved by the music, properly informed by the artist, and thoroughly entertained." Between 2007 and 2009 alone, Wolak has performed more than two dozen school shows across Canada and the US, promoting classical and cross-over music to young audiences.

Mr. Wolak won the Royal Conservatory's Concerto Competition in 2006, the Glenn Gould School's 2005 Concerto Competition and the Presser Music Award from the Presser Foundation  Earlier, as a student, he won first prize in the Poznan Clarinet Wind Instruments Competition, the Polish All-Wind Instruments Competition, and the Indiana University Clarinet Department Competition.  He has honed his craft through studies with clarinet masters at summer music festivals in Prague, Paris and elsewhere. Dedicated to being a fully rounded wind player, Wolak has also studied period instrument performance.

Born in Bialystok, Poland in 1979 into a musical family (his father was a trumpeter and his mother a violist), Wolak began piano lessons at six, and took up the clarinet six years later.  After early studies at the Music Academy of Poznan and subsequently, at the Musical Lyceum, in 2001, he was a scholarship student at Indiana University's Jacobs School of Music, where he earned his performance certificate and, two years later, his Master of Music degree while studying with Eli Eban.  He put his doctorate on hold in order to pursue advanced orchestral studies under Joaquin Valdepeñas at the Glenn Gould School of Music in Toronto in the fall of 2005, where he earned an Artist's Diploma.

Michael Bridge has performed in China, Croatia, Italy, France, the U.K., and across the USA and Canada. He made his solo orchestral debut with the Boston Pops at age 17 and performs classical, contemporary classical, folk, jazz, rock and pop music on acoustic accordion, digital accordion, and piano.

Bridge is a graduate student in classical accordion performance at the University of Toronto, studying with Professor Joseph Macerollo. His former teachers include Beverley Fess (accordion), Donna Holoboff (piano), and composers Timothy Janz and Robert Rosen (theory, history and composition).

Along with Dr. Kornel Wolak (clarinet and piano), Bridge is a founding member of DOUBLE-DOUBLE DUO – a high-energy and technologically advanced show with upcoming performances from Ecuador to Poland. Bridge has been a full-time member of Ladom Ensemble since 2014 – an acoustic Iranian-Serbian-Classical quartet based out of Toronto.

Bridge has adjudicated accordion competitions in the USA and Canada, and has given masterclasses in Virginia, West Virginia, Illinois, Nevada, Washington, Idaho, Alberta and Ontario. In 2010, he was a theory instructor at the CASSA (Calgary Arts Summer School Association) summer program for youth.

Some of Bridge’s most surprising and unusual performance credits include a TEDx Talk, playing on a float in the Calgary Stampede Parade to a live audience of 300,000, improvising live silent film accompaniments to films by Charlie Chaplin and Buster Keaton, premiering the first-ever chamber works written with digital accordion through Fawn Opera, playing polka-rock fusion shows at Texas’ wildly popular Wurstfest, and performing an accordion solo on stage with The Barenaked Ladies in If I Had $1,000,000.

Over the past decade, Bridge has recorded and produced 7 folk albums and 1 classical album (including two albums of his own compositions). As a collaborator, he has recorded two albums with Alicia Baker for the Baker-Bridge Duo, and was featured on Grammy-nominated artist Alex Meixner’s album Happiness Is a Choice.

Bridge works professionally in English, French and Spanish. He performs on Pigini and Scandalli acoustic accordions, and Roland digital accordions.