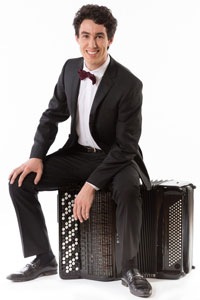 Michael Bridge has performed in China, Croatia, Italy, France, the U.K., and across the USA and Canada. He made his solo orchestral debut with the Boston Pops at age 17 and performs classical, contemporary classical, folk, jazz, rock and pop music on acoustic accordion, digital accordion, and piano.

Bridge is a graduate student in classical accordion performance at the University of Toronto, studying with Professor Joseph Macerollo. His former teachers include Beverley Fess (accordion), Donna Holoboff (piano), and composers Timothy Janz and Robert Rosen (theory, history and composition).

Along with Dr. Kornel Wolak (clarinet and piano), Bridge is a founding member of DOUBLE-DOUBLE DUO – a high-energy and technologically advanced show with upcoming performances from Ecuador to Poland. Bridge has been a full-time member of Ladom Ensemble since 2014 – an acoustic Iranian-Serbian-Classical quartet based out of Toronto.

Bridge has adjudicated accordion competitions in the USA and Canada, and has given masterclasses in Virginia, West Virginia, Illinois, Nevada, Washington, Idaho, Alberta and Ontario. In 2010, he was a theory instructor at the CASSA (Calgary Arts Summer School Association) summer program for youth.

Some of Bridge’s most surprising and unusual performance credits include a TEDx Talk, playing on a float in the Calgary Stampede Parade to a live audience of 300,000, improvising live silent film accompaniments to films by Charlie Chaplin and Buster Keaton, premiering the first-ever chamber works written with digital accordion through Fawn Opera, playing polka-rock fusion shows at Texas’ wildly popular Wurstfest, and performing an accordion solo on stage with The Barenaked Ladies in If I Had $1,000,000.

Over the past decade, Bridge has recorded and produced 7 folk albums and 1 classical album (including two albums of his own compositions). As a collaborator, he has recorded two albums with Alicia Baker for the Baker-Bridge Duo, and was featured on Grammy-nominated artist Alex Meixner’s album Happiness Is a Choice.

Bridge works professionally in English, French and Spanish. He performs on Pigini and Scandalli acoustic accordions, and Roland digital accordions.