Born in January of 1998, Emma Fisher was introduced to the cello at the age of three by her mother, Mary Fisher at the Toronto School for Strings. Coming from a musical family, she has been surrounded by the sounds of strings her whole life. Emma's orchestral debut was at the age of twelve, playing the Haydn C-Major Cello Concerto. Emma spent 3 years at Cardinal Carter Academy for the Arts under the instruction of Julia Bowkun, and has pursued home-schooling to spend the majority of her time with the cello. Emma has received numerous awards and scholarships, and has successfully competed in many festivals and competitions, such as Kiwanis, Richmond Hill Music Festival, and won the top prize at the 2015 OMFA Provincials. This past April she performed the Dvorak Rondo with the Canadian Sinfonietta under Maestro Tak Ng Lai. In July of 2015, she was invited to compete in the International David Popper Cello Competition and will be traveling to Budapest and Varpalota. Emma currently studies on scholarship in the Phil and Eli Taylor Academy at the Royal Conservatory of Music, formerly with Paul Widner and now David Hetherington. Periodically, Emma flies (with her cello) to the Jacobs School of Music at Indiana University where she takes lessons with String Academy Professor, Susan Moses. She has participated in various summer programs, such as Domaine Forget, Jacobs School of Music String Academy, Music at Port Milford, Young Artists Program at WLU. Emma has been a member of the Toronto Symphony Youth Orchestra for 3 consecutive years under the baton of Shalom Bard. Over the past 4 years, has performed in master classes for renowned international artists such as Rachel Mercer, Alisa Weilerstein, Tom Wiebe, Richard Aaron, Csaba Onczay, Peter Stumpf, Brandon Vamos Raphael Wallfisch, Phillip Müller, Bryan Epperson, and Peter Oundjian, among others. Emma plays on an 1810 Vincenzo Panormo 7/8ths cello, and a Caussin-school French cello made in 1762. 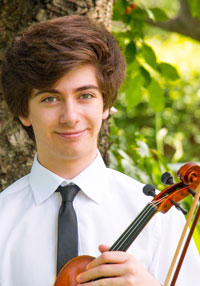 Artur Chakhmakhchyan was born July 26, 1999 in Yerevan, Armenia. He started violin lessons at six years old in Yerevan at the Tchaikovsky Specialized School of Music. The following year, Artur and his mother immigrated to Canada. At 10 years old, Artur resumed violin lessons with Mr. Jacob Lakirovich. During the last 6 years of his violin playing, Artur has won scholarships and numerous awards at the New Conservatory of Music festival, the Richmond Hill Arts festival, and the North York Music Festival. In 2012, he received the Royal Conservatory of Music Gold Medal award for having achieved the highest mark in Ontario and Quebec for the Grade 7 Violin exam. Artur currently attends Cardinal Carter Academy for the Arts and participates as a chamber player, concertmaster of Senior and Senior Chamber orchestras, and also performed as a soloist. Aside from violin, Artur was awarded first place at the 2012-2014 city finals of Concours D'Art Oratoire/French Speaking Competition. Artur has also been ac-tive in musical theatre, having performed with Star School Academy. On October 24th, he will perform Carmen Fantasy by Sarasate with the Scarborough Philharmonic Or-chestra. 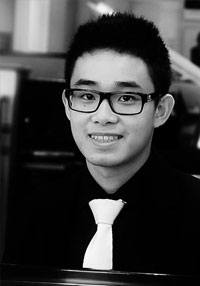 Arthur Tang studies under the tutelage of Edward Auer and Junghwa Moon-Auer. He was a grand prize-winner of 2015 Indiana University Concerto Competition. He was highly praised by The Herald-Times, Indiana for his "finger work on the Steinway keyboard, and [he] also showed admirable acquired sensitivity toward the Chopin style and voice" after his performance with the Indiana University Orchestra under the baton of Arthur Fagen. Tang received ARCT Diploma for Performer with distinction, and was awarded two gold medals from the Royal Conservatory of Music. He was invited to perform at Koerner Hall in Toronto. Tang won first prize at both the 2012 Canadian Provincial Music Festival and at the American Protégé International Competition. The Markham Music Festival, Richmond Hill Music Festival, Kiwanis Music Festival, North York Music Festival and York Region Music Festival have also awarded him prizes and scholarships. He performed at Carnegie Hall in New York City, Steinway Music Hall, Mazzoleni Concert Hall, Richmond Hill Performing Arts Centre, Markham Theatre. He has participated in private lessons and master classes with Jerome Lowenthal, Marc Durand, Peter Bithell, Bin Su, Yuja Wang, James Parker, James Anagnoson, Marietta Orlov, Araxie Altounian, Michael Esch, Carole Bancroft, and Adam Piotr Żukiewicz, and many others. Tang recently received the Premier Young Artist Award to pursue his Bachelor of Music in Piano at the Indiana University Jacobs School of Music.