Dances of the World


Dance and music have always been closely related. Music typically served as a way for dancers to express themselves through movement, but some exquisite composers have also found inspiration from dance to present their own unique musical ideas. Copland, Gershwin, Ginastera, Bartok and Piazzolla are some of the finest 20th century composers who where inspired by dances from all over the world. Canada, China, United States, Russia, Mexico, Cuba, Albania, Romania and Argentina will be represented in the opening concert of Season #12 under the baton of guest conductor Lorenzo Guggenheim. This unique program highlights the rhythmic aspects of each local tradition and the colours of every section of the orchestra, with several inspired solos from most instruments. It is music to be heard, and also, to be danced! 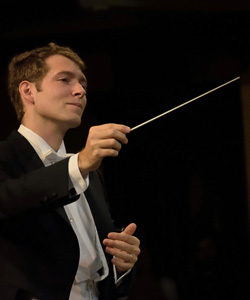 Described as instinctive and very gifted, Lorenzo Guggenheim, native of Argentina, is a conductor with an emerging career conducting opera, new music and the broad orchestral repertoire. Internationally recognized for his vibrant interpretations, Mr. Guggenheim’s career was launched by his debut in the Teatro Colón at age 23 and his performance with the Orquesta Sinfónica de Chile in 2014, after which he moved to Seattle where he completed a Master of Music degree at the University of Washington. He collaborated with the Seattle Symphony’s Prokofiev and Shostakovich festivals in 2016-18 and was twice a fellow with music director Ludovic Morlot. Once in Toronto, he co-founded the UofT Campus Philharmonic Orchestra serving now as music director. Past guest conducting engagements include the Orquesta Sinfónica de Mar del Plata, and Entre Ríos, University of Washington Symphony and Campus Orchestras, UW Opera, and Modern Ensemble, Miami Music Festival Chamber Orchestra, and Orquesta Académica Teatro Colón. This season Guggenheim conducted the North American premiere of Toshio Hosokawa’s The Maiden from the Sea to excellent reviews, and debuted with UTSO collaborating with soprano Gena van Oosten, winner of the 2018 Concerto Competition. In 2019, Mr. Guggenheim was selected as Apprentice Conductor by Orchestra Toronto and assisted with the Greater Toronto Philharmonic Orchestra for their season finale. Lorenzo Guggenheim is currently a doctoral pre-candidate at the University of Toronto under the mentorship of Uri Mayer.