Luis Armstrong - "What a worderful world"

Tickets are sold online, by telephone order and at the door. Online and phone orders are subject to a service fee. 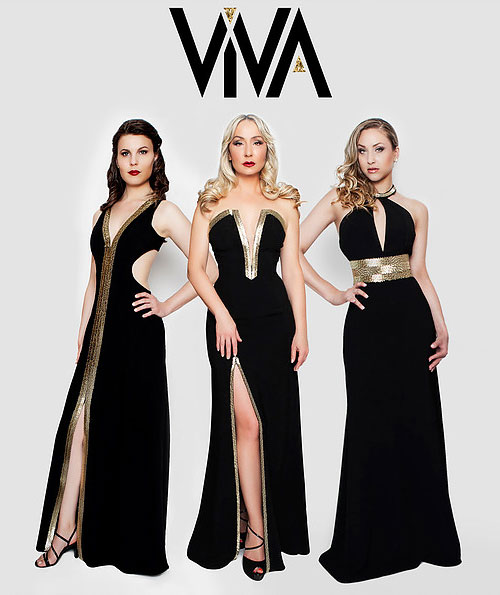 ViVA is an extraordinary vocal group expanding the boundaries of classical crossover music. Comprised of three sopranos, Anna Bateman, Erin Fisher and Katya Tchoubar, the ViVA trio hails from Toronto, Canada, and their music and sound is inspired by fellow crossover artists such as Il Divo, 2CELLOS and Evanescence. ​

ViVA is working on their debut album, set to be released in 2017. The album will feature original arrangements recorded with live orchestra, ViVA’s soaring vocals, and more intimate pieces with piano and ViVA’s beautiful three-part harmony. Throughout 2016, ViVA has released a steady stream of singles, available on iTunes, and music videos on YouTube. ​

The ladies of ViVA studied at celebrated music institutions: The Toronto Royal Conservatory of Music, University of Toronto, and University of British Columbia. They have each performed individually at acclaimed venues and festivals such as the Four Seasons Centre in Toronto, The Orpheum in Vancouver, The Rudolphinum in Prague, Aldeburgh Music Festival in the UK, and New York’s Chautauqua Festival.

In less than a year, ViVA has taken center stage at such prestigious venues as Toronto’s Palais Royale, Trinity St. Paul's Cathedral and Casa Loma. Their live performances feature two hours of classical and crossover repertoire, with cinematic backtracks, live acoustic piano, or full orchestra. At a ViVA concert, at Toronto’s historic castle, Casa Loma, the ladies serenaded an audience of over 1000 people and were featured on Toronto’s CityTV CityNews.

ViVA has made a strong start in their social media outreach, with 15K Twitter followers, 7K Facebook fans and over 125K views on their YouTube channel, featuring their most viewed videos, "What a Wonderful World," and Leonard Cohen’s “Hallelujah.” In the press, ViVA has been featured by the Toronto Star, and most recently, were interviewed by CKUW 95.9 FM radio in Winnipeg on "Shades of Classics." ​

ViVA has gone international with their version of “What a Wonderful World,” which is now being featured in two commercials in South Korea: a commercial for Doosan Group, and for the five-time Korean Baseball Series Champions, the Doosan Bears. ViVA has also secured international distribution.

This fall, ViVA was nominated for the “Emerging Artist of the Year” award, by InFAME Awards. ViVA was also featured in the opening ceremonies and as a mainstage act in Toronto’s Polish Festival, in Roncesvalles. Recently, ViVA performed a sold-out show at Mississauga’s Living Arts Centre with the CSO.